The Turkish giants have made an enquiry for the Spaniard and are willing to match the Londoners’ £1.5 million valuation of the out-of-favour goalkeeper and his £50,000-a-week wages.

Almunia would still prefer a return to Spain and there remains strong interest from Malaga, while Atletico Madrid are also monitoring the 33-year-old’s availability.

Goal.com UK first revealed last month that Arsene Wenger had informed the goalkeeper that he should begin looking for another club and that there was no appetite to offer him a new contract beyond his current deal, which ends in 2012.

Since suffering an elbow injury in the home defeat to West Brom on September 25, Almunia has endured a number of setbacks in his rehabilitation. He has played only 45 minutes for the reserves and an ankle injury picked up in training will keep him on the sidelines for a further two to three weeks.

“Almunia has played his last game for Arsenal,” a club source told Goal.com UK. “It looks like he is going to Turkey although there is still interest from Spain.”

Wenger has no plans to replace the Spaniard in this month’s transfer window and is prepared to put his faith for the rest of the season in new No.1 Lukasz Fabianski and impressive 20-year-old Wojciech Szczesny, who looked comfortable on the big stage when he stepped in at the last minute to make his Premier League debut against Manchester United last month.

Fabianski, who has started every Premier League and Champions League game bar one since Almunia’s injury, has benefited from an extended run in the team and has reduced his number of costly unforced errors.

Szczesny is viewed by Wenger as the club’s long-term No.1 and signed a new five-year contract last November.
Genişletmek için tıkla ... 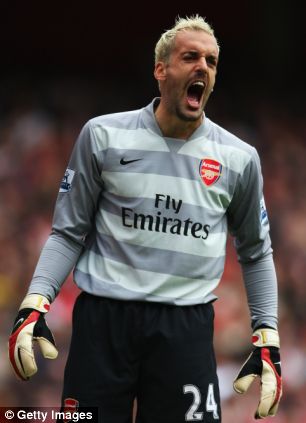